Vietnam: A Spotlight of Southeast Asia

Vietnam (the Socialist Republic of Vietnam) is one of the most dynamic emerging countries in the Southeast Asia region. Vietnam is bordered by China to the north, Laos to the Northwest, Cambodia to the southwest, and the sea to the east and southeast.

Hanoi is the capital and also the second largest city in Vietnam. The city lies on the right bank of the Red River. October 2010 officially marked 1000 years since the establishment of the city.

The largest and fastest developing city is Ho Chi Minh City, which is located in the south of Vietnam and is 1,090 miles south of Hanoi.

From Ho Chi Minh City to Hanoi, Vietnam’s higher education universities & institutions offer a broader and broader range of programs that are taught in English. The very first aim of the programs taught in English was to provide international study environments for Vietnamese students as well as to prepare them in English & skills for future integration. With the fast growth in the economy and globalization, leading universities and institutions have started to recruit international students to come and study in Vietnam, which makes the country comes closer to a multicultural nation and integration.

What makes Vietnam an ultimate destination for pursuing higher education? Read more below!

Fast-moving city with a high speed of internationalization

Ho Chi Minh City (also called Sai Gon) is described as the most important economic center in Vietnam as it accounts for a high proportion of the economy. The city is now more and more culturally diversified with international people and businesses coming to Vietnam. This plays a part in making the city always dynamic and moving. Hanoi and Da Nang are the second and third busiest cities with fast-growing rate and investments from global businesses.

Vietnam’s per capita GDP growth since has been among the fastest in the world. The three months posted such high growth as the same period in 2021 which saw the COVID-19 pandemic breaking out strongly and seriously affecting production and business activities.
With upbeat signs reported in almost all aspects between January and September, the GDP was estimated to rise 8.83% for the period, the highest nine-month growth recorded in 2011-2022, according to Trading Economics (New York, USA). 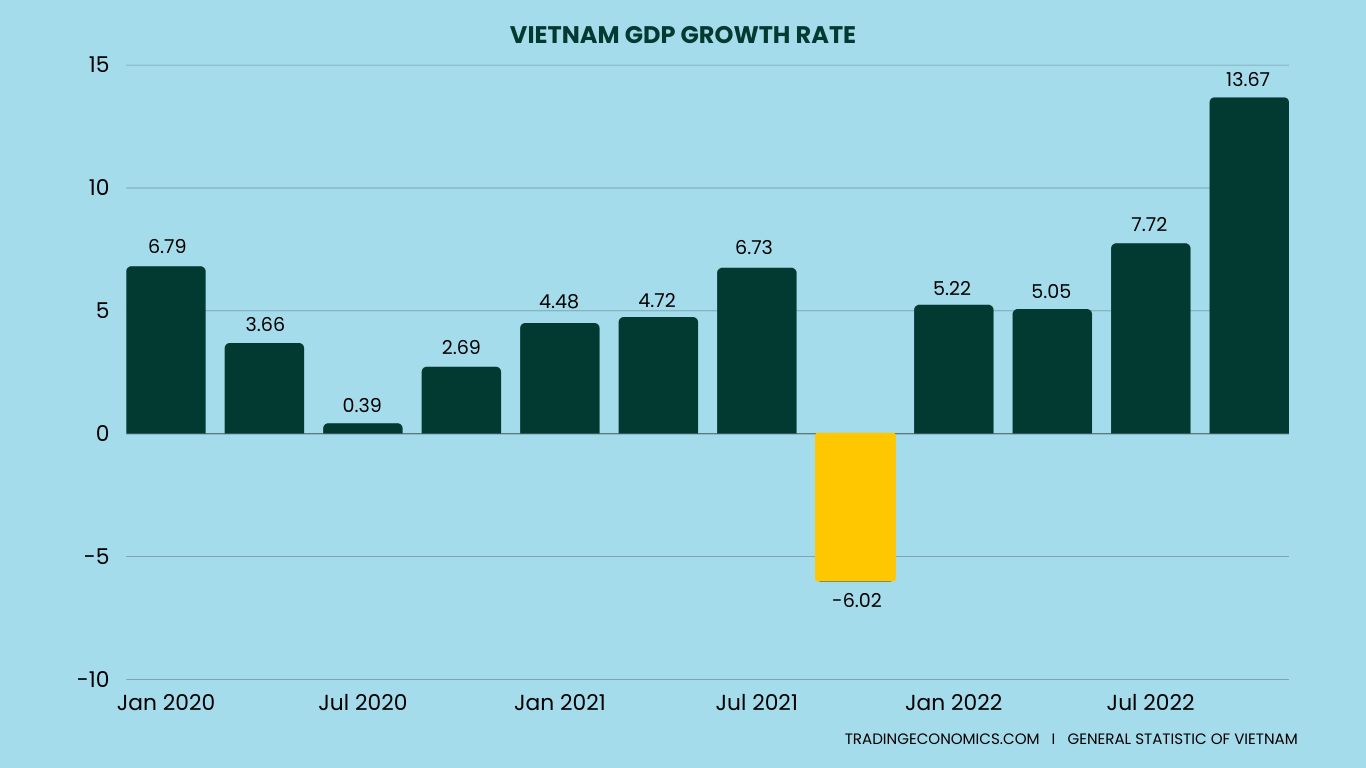 Vietnam Ministry of Foreign Affairs has issued visa exemptions for citizens of 24 countries for up to 30 days. Citizens from other countries can apply online for their visas to Vietnam.

When it comes to choosing a country to live in or study abroad, socio-political factors are also taken into consideration. Vietnam is ranked 44th in the world for its level of peacefulness. According to the Global Peace Index 2022 Report of the Institute for Economics and Peace (IEP), Vietnam scored 1.786 points and is classified as having a high level of peacefulness. Vietnam is also ranked 48th in Societal Safety And Security Domain with 2.061 points. 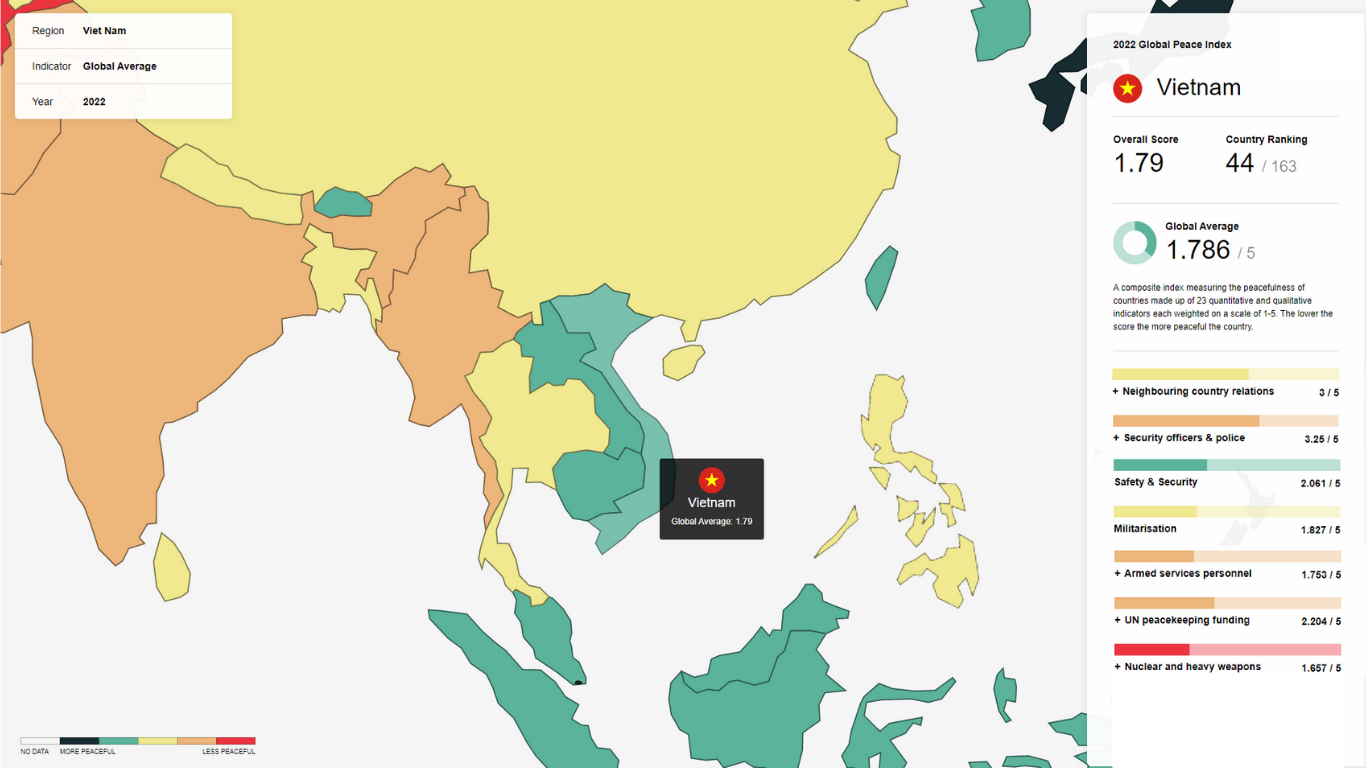 Vietnamese cuisines make up an important part of deeply reflecting its culture. The cuisines are various from region to region, but they share two main similarities. First, steamed rice almost always makes most of every lunch and dinner. Second, most Vietnamese dishes have a lot of fresh vegetables, which partly flavored the taste of the cuisine.

Apart from the cuisines, there are cultural activities that make you feel the culture. The biggest and the most cultural holiday is the Lunar New Year Holiday. People also celebrate popular holidays in the world such as Valentine’s Day, Christmas, etc. 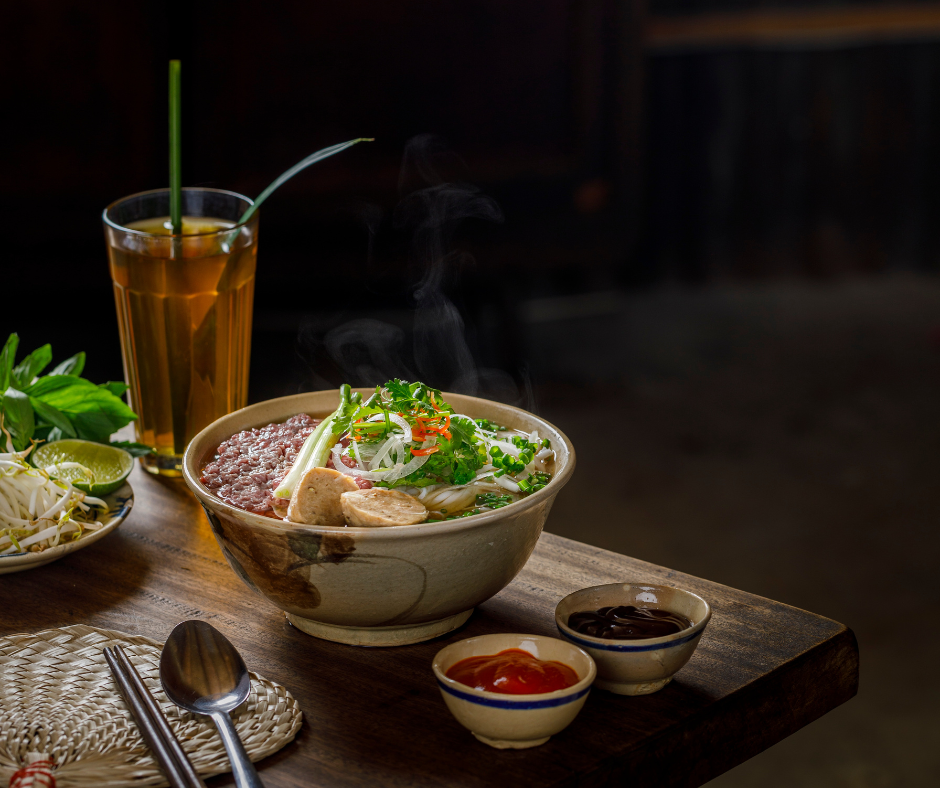 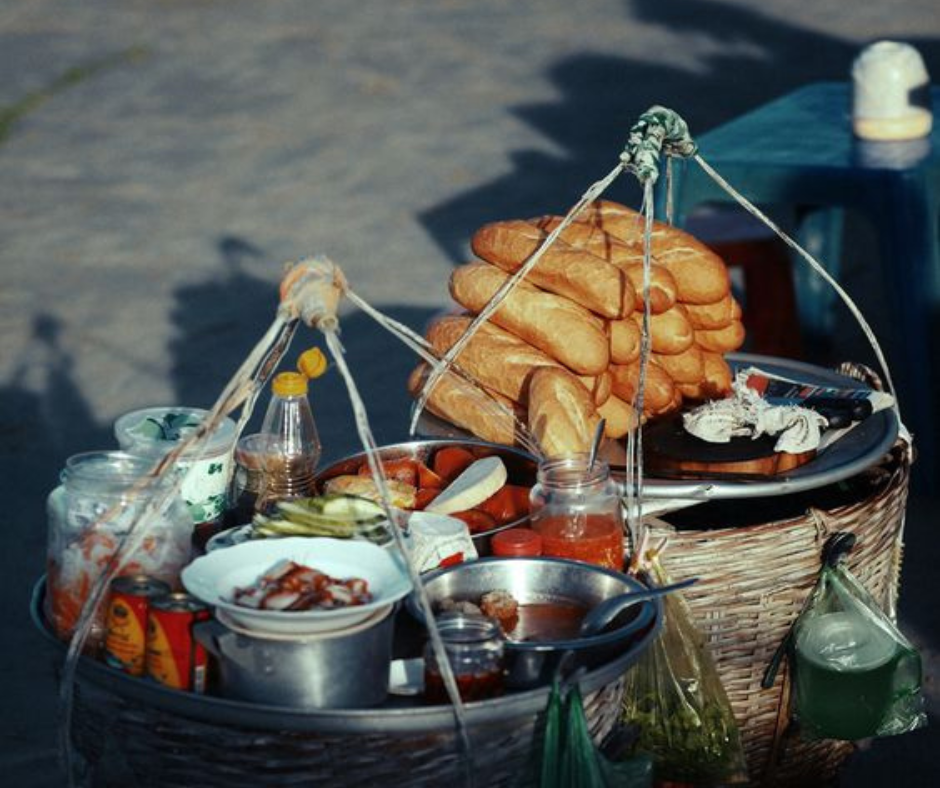 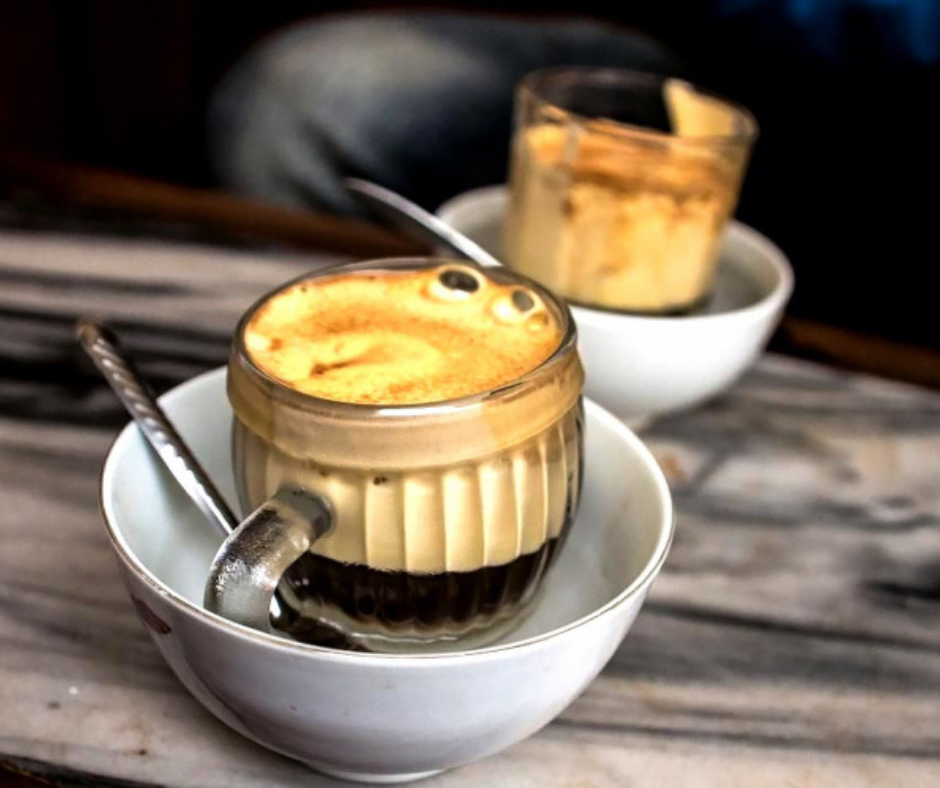 Although Ho Chi Minh City is the most modernized city, still keeps its traditions, especially when there are holidays or festivals. Hanoi is famous for its ancientness with over 1000 years of history.

Hue, a tranquil and peaceful city, is well-known for its historical sights as Hue was once the imperial capital. The Complex of Hue Monuments is recognized by UNESCO as a World Heritage Site.

Da Nang is a young and energetic coastal city, which is also voted to be the top 10 tourist destinations on the rise in the world by TripAdvisor, the global travel search engine. Most Vietnamese people also see Da Nang as the most worth-living city in Vietnam.

Besides the three biggest cities, Nha Trang, Da Lat, Phan Thiet, Can Tho, etc. are worth-visiting cities for their own uniqueness. 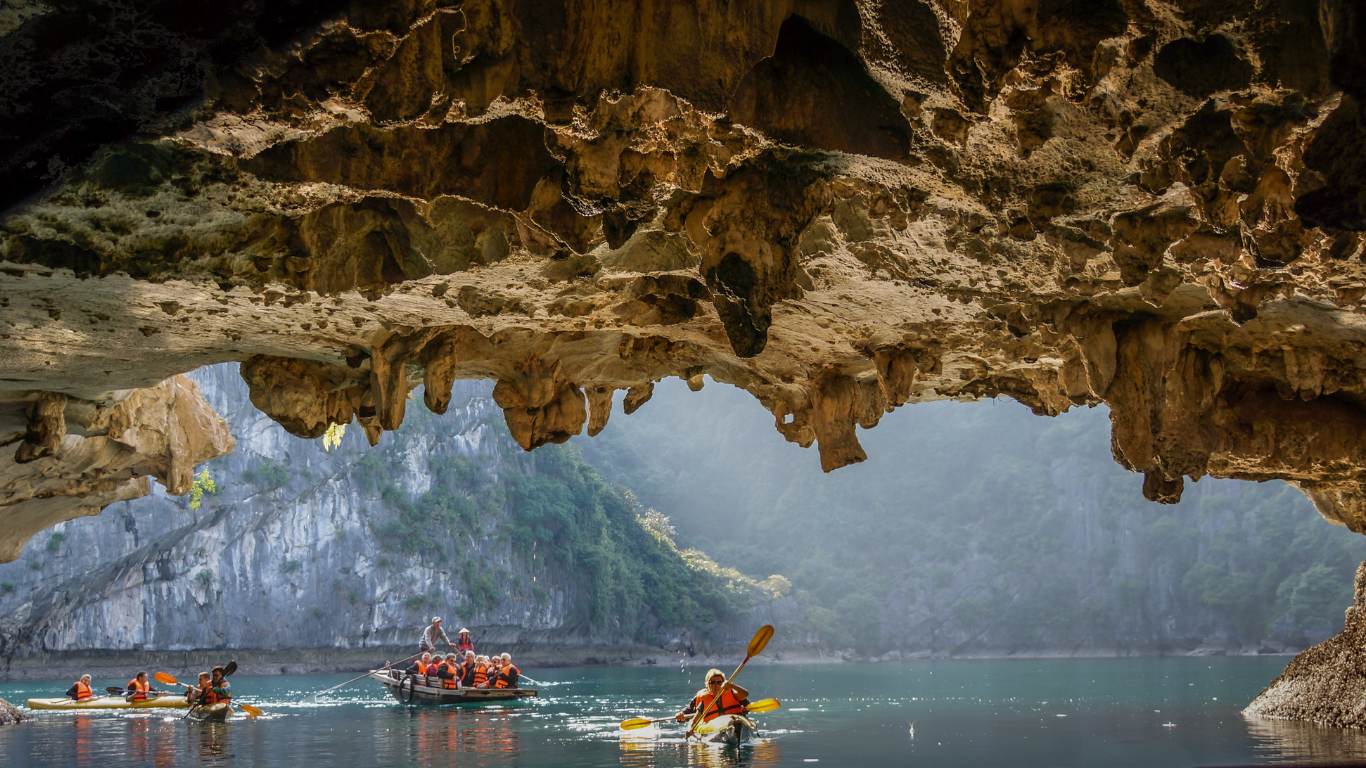 Leave your question or concern through the channels below. 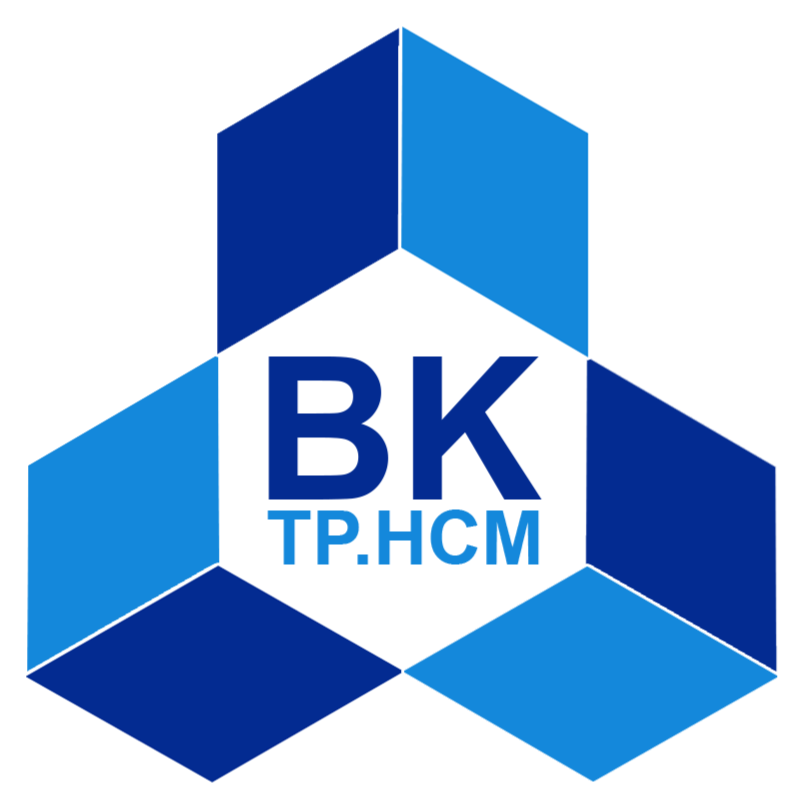